Savannah History
The first offspring produced by breeding an serval to a domestic cat is known as the "F1" generation. F1 in genetics terms means "first filial". Many of these attempted crosses do not produce live young. When the kittens do survive, the F1 males are sterile. The F1 hybrid females, on the other hand, can be fertile and can be bred to other domestic cats.  This is how the savannah breed was started. Due to the difference in the gestation periods of a domestic cat and a serval cat, the first generation kittens are sometimes born premature and require an incredible amount of care to survive. These are some reasons why savannahs are so expensive.

The same is true of the F3 foundation generation.  A small percentage of the F4 males may occasionally produce some offspring. Normally an F5 is the first generation that will produce offspring. The first savannah male to be proven fertile was an F5 savannah male named “Wonderlust”. You will see his name in many pedigrees across North America. We have 3 fertile F5 male savannahs in our breeding program, 2 of them are SST silver spotted tabby with black spots, and 1 is BST brown spotted tabby with black spots. We also have the rare privilege of having a “snow”stud in our breeding program.

Reproduction and Genetics
When an F1 female hybrid is crossed, the next generation is called the F2. Once again, the F2 savannah males are not fertile. The females are once again usually bred to fertile savannah males now that we have reached fertility in the higher generations. Some breeders choose not to use a male savannah stud, which still produces offspring which TICA classes as savannahs, but they are not purebred and do not continue the long lanky look of the savannah, or other characteristics like their closely placed ears. This weakens the breed and brings a bad name to savannah breeders. Beware of these breeders, they are often called "backyard breeders:".

Savannahs may also be referred to as SVxSV (SV is the TICA www.tica.org abreviation for the Savannah cat breed), along with the filial number. These letters after the filial number are as follows:  A, B, C and SBT. A designation of "A" means that one parent is a Savannah and the other is not a savannah. "B" is used for both parents are Savannahs with one of then being an "A". "C" is used when both parents are Savannahs and one of them is a "B". Therefore A x (any SV) = B; B x (B,C,SBT) = C; C x (C, SBT) = SBT, SBT x SBT = SBT. F1 generations Savannahs are always A since the father is a non-savannah - a serval. F4 Generation is the first generation that can be a SBT. SBT stands for "stud book tradition" and is considered a "purebred" cat.

Physical Traits
Since the savannah cat is a hybrid cat breed between the African serval cat and a domestic cat, a discerning savannah cat breeder will try very hard to keep the look of the breed as close to the serval cat as possible. The largest savannahs produced are F1’s, since they have a serval as a parent.  Many states and provinces do not allow any generation of savannah, some states  and provinces allow the savannah starting at the 4th generation, while some provinces and states do not have any restrictions on the savannah cat breed. We have produced some large later generation savannahs here at Simply Spots.  “Capone” on our Testimonials page is not even 2 years old yet, and already weighs 18 lbs!!

Simply Spots "Capone" (born here at Simply Spots) shown below at 1 year 8 months old. Already weighs 18 lbs!!
The savannah breed has very long legs, and these make the cat look almost twice their size. The savannah is known as a large cat, this is usually not true. Their long lean bodies and very long legs make for a cat that looks almost twice the size of a regular house cat when full grown at 2 – 3 year of age. The male savannah usually grows to be larger than the female. Large ears placed closely on the top of the cats head, triangular face shape, tear stains on nose, and boomerang shaped eyes are a few of the traits that quality purebred savannahs should have. Long lean bodies which are tall and narrow, along with very long graceful legs really make the savannah breed a unique cat breed. Savannahs have spots all down their bodies, even right down to the tips of their fingers. Savannahs toes are very long, much different than a regular domestic cat. They are so long that I like to call them finger toes. Very unique. Savannahs spots should run is straight horizontal lines down the back. The spots should be solid black, just like the serval cat spots. Different Generations of Savannahs (F1, F2, SBT, etc)F1 is “first filial” or first generation from the serval. One of the parents of this F1 savannah cat is an African serval. F2 is the second generation away from the serval F3 is the third generation and so on. SBT is the stud book tradition, this is the breed standard and is accepted in TICA sponsored cat shows. To achieve SBT it takes much effort and dedication. Purebred savannahs must be bred savannah to savannah for 3 generations. Are They More Like Cats or Dogs?  Savannahs have a very similar brain wave to a dog - wanting to go for walks and play fetch - so thus get along with dogs almost better than with other cats. Savannahs are often selected as pets by previous dog owners, since they are often more sociable and playful than some other breeds of cats. Savannahs love to go for walks on a leash and harness. They will listen to commands while on the leash. They are also similar to dogs in that they love water. They will splash in the water for hours just for fun. You can even choose to have a kids pool set up with feeder fish in it. They will have a blast trying to catch the fish, and they get a treat along with the fun! Savannahs also love to play fetch. Some of our buyers have reported that their savannah would play fetch with them until their arm fell off from throwing!! A great game for the energetic cat! Savannahs are the best of both worlds, and the perfect solution for a family who can't decide between a dog or a cat. Things You Should KnowSavannahs love to run jump and play. They can jump up to 8 feet high with ease. Our savannahs commonly jump and perch on the top of a door while it is open. Savannahs are very agile, and can jump onto any surface in your home. So if you are planning to bring a savannah into your family, make sure your home is “savannah proof”. You may choose to have baby locks on your cupboards, savannahs love opening cupboards looking for a yummy snack, or just for a good game of hide and go seek. F1s and F2s are often gorgeous, but should not be considered as pets for inexperienced households.   The first several generations of savannah kittens Canada, are illegal in a number of provinces. Example: they can be extremely active, a touch on the moody side and due to their size are not good to have around young children. There are always exceptions to this, but in general it is not recommended to have F1's or F2's in homes with small children. The fifth generation of offspring that have been breed only to other savannahs for four generations are considered domestic savannah cats.  F5 - 5th generation savannahs are classed almost everywhere in the world as "a pet" and not a wild animal, which means they are legal almost everywhere in the world starting at the 5th generation F5.  When savannahs are bred savannah to savannah for 3 consecutive generations TICA registers these as "SBT".  SBT pedigreed savannahs can be shown in TICA-sponsored cat shows. savannahs make great pets.  By careful breeding, a discerning TICA affiliated cattery maintains the "wild" look, while producing well-socialized pets. Make sure you get to know your breeder in lengthy conversation on the phone or in person prior to purchasing your savannah kitten.TICA The International Cat AssociationAll of our purebred savannahs are registered through The International Cat Association www.tica.org we have pedigrees and registration certificates on each of our breeding kings and queens available to view upon request. Simply Spots is a TICA registered cattery. All our kittens born here are registered with TICA. We believe it is very important for every savannah buyer to have the registration number for both the dam and sire of their kitten, and be able to see the bloodlines of their very own kitten right back to the serval.LegalityF5 is the first generation of savannah cat that can be legally produced in Alberta. Each province or state has its own rules and regulations as to what generation of savannah is allowed. Some states and provinces do not allow any generation of savannah cat.

Established in 2008. We are a small family run savannah cat breeding program. Only the best savannah/serval traits are brought to our breeding program. Long legs, body and neck, and large closely placed ears with great contrast from light background to black spots is what we are all about. We pride ourselves in regular vet checks to ensure the health of all of our Savannahs. Simply Spots is located in rural Olds, Alberta Canada. 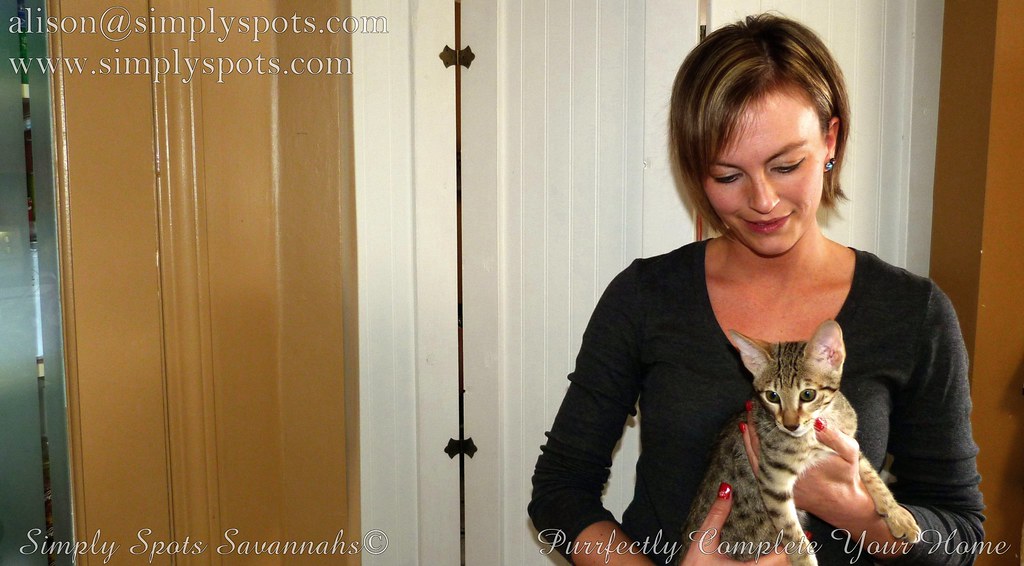